Halloween, Climate Reality Talk and the Future of Food 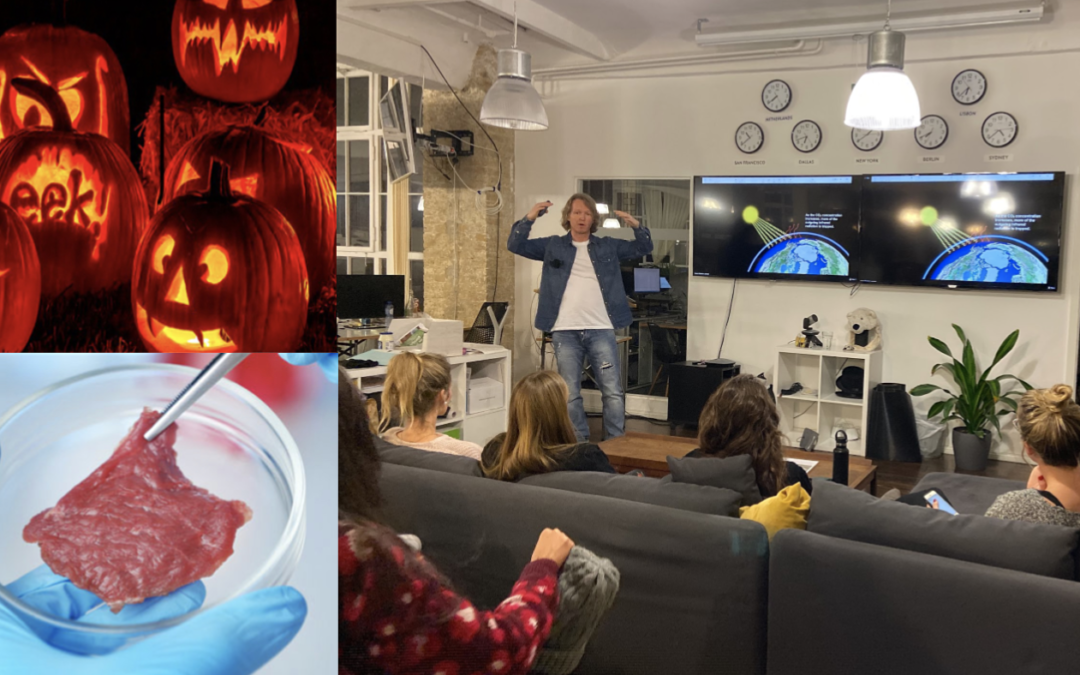 This Tuesday, I was invited by Berlin startup Marley Spoon to give a climate talk within the scope of an after-work meetup. As a short background, I serve as a Climate Leader in the Climate Reality Project which was founded by Al Gore in the aftermath of his revolutionary movie “An inconvenient truth”. In this role, I give such climate talks frequently to big and medium-sized companies, startups, NGOs, friends and family, communities and basically every group I can gather to address the truth about the climate crisis. And of course, we then discuss what we can do about it in our everyday lives. The Climate Reality talk follows three subsequent questions which are “Must we change?”, “Can we change?” and “Will we change?”. As a fun element in a rather serious talk I always pull out my polar bear hat and turn into a modern shaman at a certain point during my talk and introduce myself as polaROBear – climate fighter & advocate of the polar bears.

Walking to the Marley Spoon office through the streets of Berlin and looking at the stereotypical Halloween-themed decorations in the windows and front yards my mind started wandering.  Just a couple of weeks ago, I had visited the “Dracula” Castle Bran in Romania. However, that experience did not scare me really. And the carved pumpkins, witches and monsters which I was now passing by on my walk seemed like pure comedy. I was thinking to myself that if you were to make a real scary Halloween pumpkin you would need to carve out all the climate change patterns with the pumpkin symbolizing mother Earth. Pondering further, I came to the realization the thing which really scares me in my life is something as big as the climate crisis.

Marley Spoon is a very successful food startup which was founded in Berlin and meanwhile operates globally with offices in Australia, the US and various European cities. Being a responsible player, the company is very adamant about monitoring the value chain of the ingredients which it buys for its products. Since agriculture as the main supplier of food ingredients is still one of the biggest emitters of carbon oxides, Marley Spoon’s employees’ interest in the climate crisis is very honorable. From the attendee group of about 15 people I felt a strong genuine aspiration to learn as much as possible about the subject matter. In the Q&A session the Marley Spoon employees had many questions and comments about the “Can we change?” and “Will we change?” part. We passionately discussed what the role of the food industry is in the overall climate change picture. The biggest question was about the creation of palatable and affordable food offers in the spectrum of green responsibility, health consciousness and culinary enjoyment.

As a mentor of Singularity University, I am in close touch with the SU community. Peter Diamandis, co-founder of Singularity University, dedicated one of his recent newsletters on exponential technology to the future of food. He argues that through the convergence of biotechnology and agricultural technology, we will witness the birth of the most ethical, nutritious, and environmentally sustainable food system ever devised by mankind. These technological advancements include things like vertical farming, 3D printing and cultured meat.

As stated in the newsletter, vertical farming is surging at an amazing 25 percent annual growth rate and projected to be a global US$12 billion industry in 5 years from now. The benefits are very clear: 90 percent less water consumption, optimized AI based supply of nutrients to the plant, tastier and far more nutritious food. And with vertical farming “local foods” will be truly local with a drastically reduced carbon footprint. Food tech startup Anrich3D aims to create meals via 3D-printing that are customized to your medical records, heath data from your smart wearables, and patterns detected by your sleep trackers. Animal protein is a difficult subject to say the least. Meat is responsible for 14.5 percent of all greenhouse gases and a considerable portion and largely contributes to the global deforestation problem. And in mass production farms animals still suffer under unworthy living conditions. The answer might be cultured meat where meat is literally grown in the lab. Culturing meat works like this: Stem cells are taken from a living animal which are then put into a nutrient-rich solution. Bioreactors will power the whole process and as a result artificial meat will grow. Diamandis asks “Can you imagine a future where millions of square miles of pastoral land are reclaimed by nature, creating new forests and revitalizing the Earth’s vital carbon sinks?”. According to him, cultured meat uses 99 percent less land, 82-96 percent less water, and produces 78-96 percent less greenhouses gases. I find these figures very strong supporting facts for cultured meat.

In closing, humans have always coped with big challenges in creative ways. In the light of megatrends like global population growth, climate change and land use, the future of food is one of our big challenges for the next decades. Possibly we can 3D-print an edible pumpkin by the year 2030 and slaughterhouses might only live on as ghost stories we tell our grandchildren on Halloween.