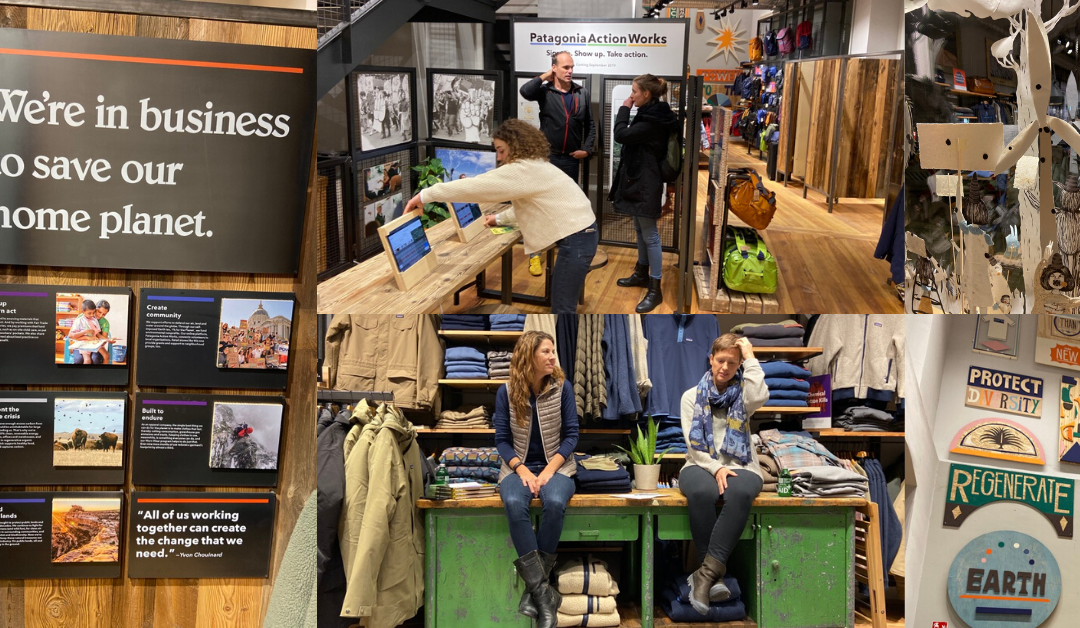 I am still so excited! On Wednesday last week, I experienced brand activism at its best. The Outdoor brand Patagonia opened a new store in Berlin on Münzstraße about two months ago. Part of the global Patagonia retail concept is to use its own stores as a platform for environmental activism which is called Patagonia Action Works. As a side note, Patagonia became a certified B Corp in 2011. On 13 November 2019 I was invited by Axel Wessolowski, currently in charge of Action Works at the Berlin store, to join him and the Action Works community for an evening of “Business & Environmental Activism“ with Mihela Wolfe (Director of Environmental Initiatives, EMEA @Patagonia) and Lisa Pike (VP of Environmental Activism’s @Patagonia).

Patagonia was founded by the passionate rock climber Yvon Chouinard in 1973 and is based in Ventura, California. It is the global brand which is rightfully accredited and recognized as the inventor of the purpose-driven segment. Since the early 70ies Patagonia has been acting out the balance of People, Planet and Profit with full vigour. Today the brand is an impactful and flourishing B Corp with annual sales of over a billion US Dollars. And yes, you can say it is a global love brand … and increasingly so. One percent of this revenue figure which means a total of 10 million US Dollars goes to activism projects with focus on conservation and sustainability. Before going to the evening event, I took the time to read through Patagonia’s annual report 2018, which of course written in B Corp format, which filled my heart with pure joy. I highly recommend to take a look at it in order to get a prime example of modern positive impact business reporting. I promise – you will not regret it.

Mihela Wolfe had travelled in from the European office in Amsterdam and talked about how Patagonia selects the green activism projects which it supports in Europe. She made a strong point that she and her team want to know the organization inside out before investing in them. This is unlike the practice of many big corporations which merely provide the funds to big environmental organizations and projects, but almost always lack the due diligence before forming alliances. One example she presented in full detail was about elderly women in Bosnia who protected the local river close to their village. When they were portrayed by Patagonia filmmakers they become environmental activist rock stars overnight all over the Balkan.

Lisa Pike, who has been with the brand for more than 16 years and is based in Ventura, California, talked about how Patagonia’s CEO Rose Marcario had changed the company’s mission statement from “Build the best product, cause no unnecessary harm, use business to inspire and implement solutions to the environmental crisis“ to a brief and punchy “We’re in business to save our home planet” and what fundamental shift this initiated in the organization. While sounding very similar, the shortening and pointedness of the mission statement had unleashed tremendous creative potential among all employees. She also talked about how Patagonia took it to the next level on Black Friday in 2016 to send a strong signal against mindless over-consumption. In that year, the brand contributed 100% of its Black Friday sales to environmental organizations, totalling 10 million US Dollars. Patagonia is also a first mover in the emerging circular economy. As of 2017 certain Patagonia merchandise that is still in mint condition can either be repaired for further use or returned for new merchandise credits. The used merchandise gets cleaned and repaired and sold on their “Worn Wear” website. Lisa also talked about how Patagonia is unapologetically political. For instance, the company sued the US government and President Donald trump for his proclamations of reducing the Bears Ears National Monument by 85% and the Grand Staircase-Escalante National Monument by almost 50%. And one year later, in 2018, the company had announced that it would donate the 10 million US Dollars it received from the Trump administration’s 2017 tax cuts to groups committed to protecting air, land and water and finding solutions to the climate crisis.

Following the heartfelt and inspirational talks of Lisa Pike and Mihela Wolfe the around fifty event attendees engaged in a lively Q&A session with the two women over some drinks and finger food. With a lot of inspiration and new insights I left the Patagonia store around 10:30pm. Before leaving though, I could agree with Mihela and Lisa to collaborate through the Factory Berlin Sustainability Circle and the wider green activist Berlin community in order join forces and bundle energies to save our home planet which is fantastic. And I will definitely be back at the Patagonia store for Action Works. That is for sure!