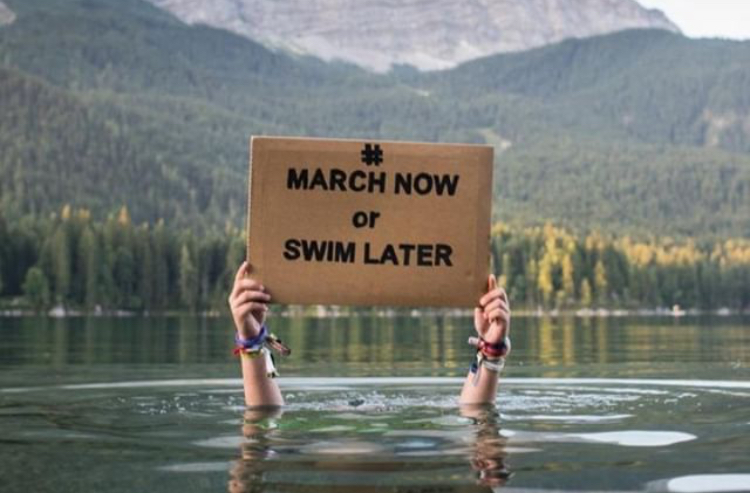 Tomorrow, millions of people will be protesting in the streets and squares all over the globe claiming climate justice and immediate action to fight climate change. This exponentially growing movement is driven by gen Z-global citizens. The face of “Fridays for Future” demonstrations and almost any other climate policy protest is undoubtedly Greta Thunberg who despite her young age already is one of the most powerful climate leaders in history. The 16-year-old Swedish activist inspires millions of people and leads the climate protests through her fearless presence and clear articulation of key issues and necessary action steps. One can only hope that the global mass protests tomorrow will have a ripple effect and cause a wide awakening regarding the biggest challenge we are facing as a global society.

The time series data spanning from the pre-industrial era until today shows a clear picture. In the scientific community and in politics there is a wide consensus that carbon emissions, the result of our fossil fuel economy, are the key driver for global warming. Only few people today still fight the fact that climate change is man-made. Or in other words, the rate of climate change denial is decreasing as facts have the loudest voice. The ever-increasing temperatures are responsible for draughts, flooding, wild fires and complex climatic changes such as jet stream break-downs and unpredictable changes in weather patterns. For instance, severe flooding is four times more likely to occur today than it was back in 1980. Catastrophes, human tragedies and severe hardship are a direct effect of climate change. The economic loss is huge and insurance companies have to settle million dollar sums in damages while facing increasing weather risks. So, what do we mean when we talk about fighting climate change? We talk about slowing down, stopping and eventually reversing climate change. In this context, the Paris climate agreement which was signed in 2015 addresses the first step – slowing down climate change which is to limit the temperature increase to 1.5°C above pre-industrial levels. Hence, we are still a far stretch from stopping let alone reversing climate change. While many current observations and various different climate models predict an even faster warming of our planet the biggest industrial nations struggle to meet their short-term carbon emission targets.

The climate change research goes back all the way to the late 19th century when scientists first argued that human emissions of greenhouse gases could change the climate. In the 1960 with advancements in research methodology and the arrival of computing technology the warming effect of carbon oxides became increasingly convincing. By the 1990s, as a result of more refined computer models a wide consensus had been reached in the climate research community that carbon emissions were in fact deeply involved in climate change. In 2006 the documentary “An inconvenient truth” premiered at the Sundance film festival portraying Al Gore’s campaign to educate people about global warming. Finally, in December 2015 the Paris climate was negotiated and later signed by 195 countries. It is widely known that the US, one of the biggest economies and biggest carbon oxide polluters in the world, became the most famous Paris agreement drop-out in 2017 under the Trump administration. Despite the insights about what is happening around us and the sheer fact that humanity is causing these life-threatening changes, no significant changes have been made since the statistically significant revelations have been published two decades ago. This inertia is mainly due to the short-term interests of the fossil fuel industry which the Western world is based on and which has been spilling over into politics. However, as global warming is accelerating at record speeds and the pain of its harmful effects increases drastically people recognise the devastating danger, join forces and challenge politics and corporations to finally drive profound change towards exiting the fossil fuel economy. Humanity is creative and has the technological solutions to address climate change. Hence, we know what is going on and we have the assets to address the issue. The key question is: Will we change and act with integrity? As Barack Obama rightfully stated: “We are the first generation to feel the impact of climate change and the last to be able to do anything about it.”

In 2018 I became a Climate Leader in Al Gore’s Climate Reality Project. Today, I give talks about climate change, participate in climate change protests and help companies to incorporate green goals into their business model via my consulting business Purenessity. Side by side with many green & social impact entrepreneurs I will join the Global Climate Strike tomorrow in Berlin. My question to you is: Will you join the climate revolution?